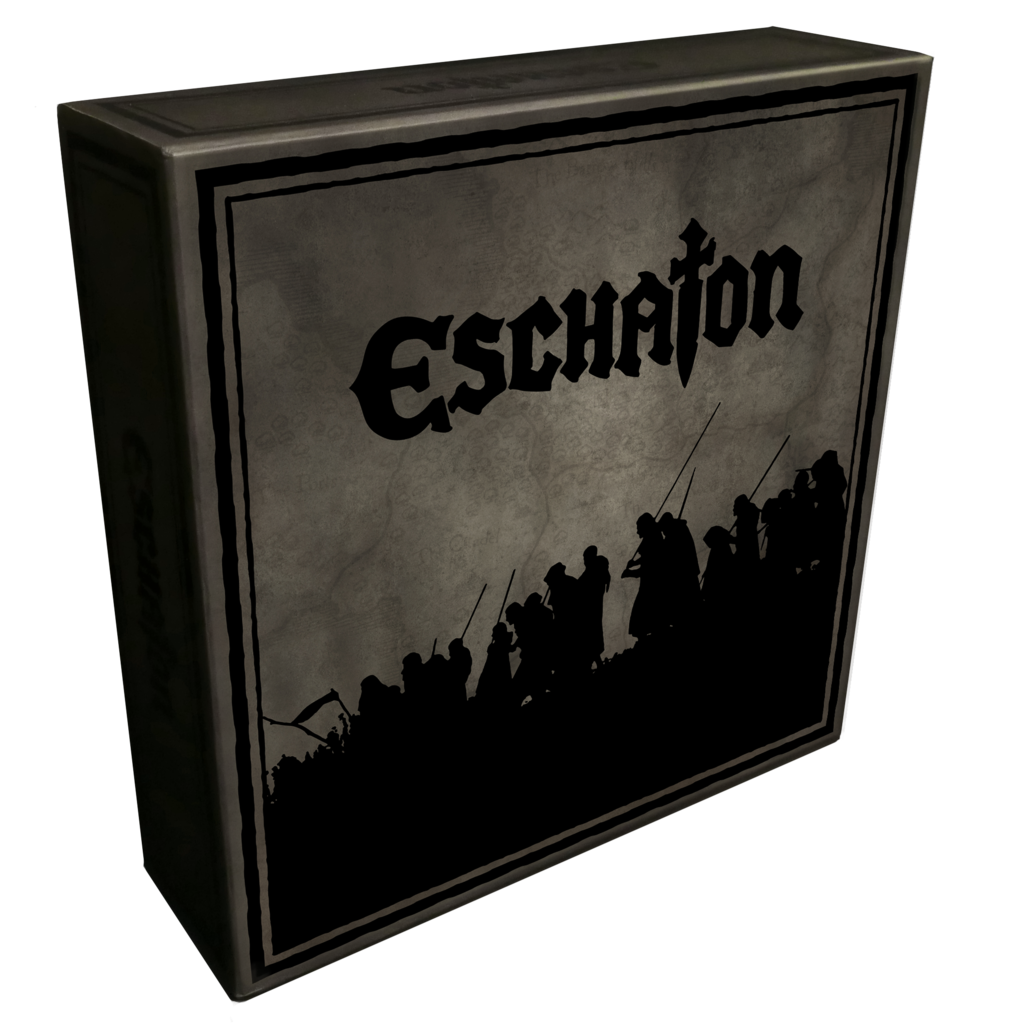 So yeah, Tom Vasel will never review this game. A review of Eschaton.

The Eschaton is described by theologian Charles Harold Dodd as the divinely ordained end of history. In Eschaton the deck building game, you play as a doomsday cult in a fantasy setting inspired by the European dark ages. Your goal is to curry the most favor (victory points) with “The Dark One” (Satan) prior to Armageddon (the end of the game). Favor will be earned through the types of cards you add to your deck (including those culled from your deck), accomplishing Omens (goals spelled out on some event cards), and through area control on the game board.

In Eschaton, you are doing the normal deck building types of things dressed up in narrative terms such as human sacrifice, summoning demons, performing unholy ceremonies, unleashing blights, and generally causing ridiculous amounts of bloodshed. Sounds fun, right? The narrative of Eschaton is admittedly dark and will absolutely be a deal breaker for many folks I suspect. If you haven’t stopped reading this review by now, the question on your mind is probably something along the lines of, “but is it any good?” 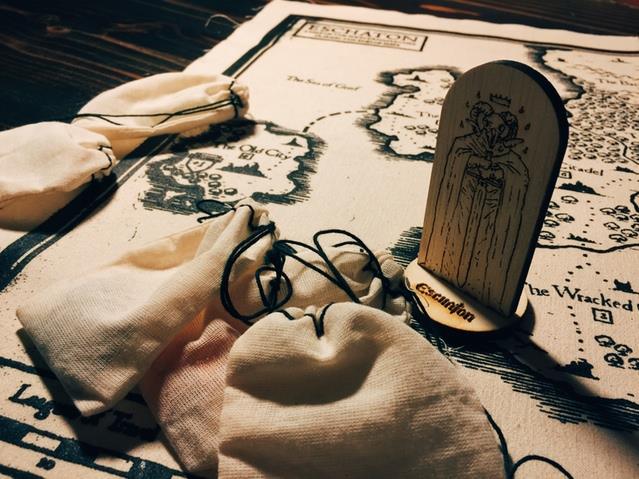 The first thing that jumps out about Eschaton is how gorgeous and narrative appropriate the art and layout design are. The card backs are simple yet pleasingly dark designs. The Event and Arcana decks mostly use a wood cut art style that holds very true to the setting. The game board too uses a very consistent and nicely detailed wood cut art style. On the table, the game as a whole looks gorgeous and has above average table presence. I am slightly less impressed by the character card art which, while consistent in its lack of a color palate, looks a bit like it uses a modern Anime/manga style. This is a bit jarring when compared to the awesome period art we see on pretty much every other art asset in the game. Its a minor complaint in an otherwise stellar presentation.

Each round of the game begins with an event phase, there is nothing new here at all, however, I would like to point out that the events themselves never feel rehashed or boring. Many games fall back on using an event phase in the game to upset the predictability of a game, to create chaos. The problem with using an event deck typically, is that in most games, the cards in these event deck feel tacked on and unimaginative. The card may tweak a rule in some way or force all players to do something unpleasant. Very rarely are the cards themselves particularly interesting from a mechanical or narrative perspective. In Eschaton though, the design team has given up a large supply of random cards to use, most of which offer mechanical tweaks that feel new and fresh or offer particularly interesting from a narrative point of view. 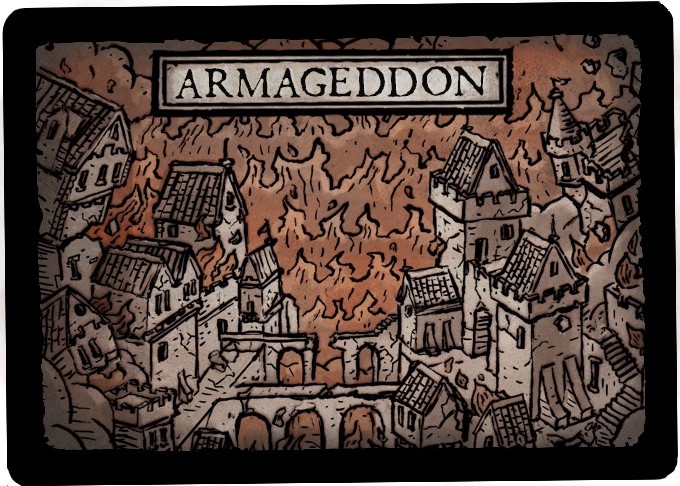 The Omen cards in the event deck also make for exciting points of conflict in the game. When an Omen card is revealed, players can race to compete and claim the Omen card by completing some objective. If you are the only player to complete the objective when the next Omen card comes up in the deck, you win the card (and a significant point boon). This is the main way the game forces players to go after one another. In my experience, the fights over the Omen cards offer the most dramatic conflicts in the game. While the game offers some secondary bonuses for holding certain areas on the board, most games I’ve seen have players largely ignoring the board state in lieu of focusing on the fight over the Omen cards.

Not everything about the end times is all roses and puppies though. The area control features of Eschaton feel a bit wonky and can be counter intuitive for new players. Nothing, except for your resource limits, prevents your units from moving all over the board. Players can spend influence (the “money” you normally use to recruit cards to your deck) to move a unit without limits across the board. Then in the Aggression portion of the Action phase, players can spend military strength to deploy, move, and attack with their units (although moving in this phase is limited to 1 territory per cube). The end result feels odd, especially since controlling territories is determined by the majority presence in an area, and not through combat. Combat is almost an after thought, and is used mainly as a way of forcing your opponent to waste time and resources redeploying units. In fact, often times, the more efficient way of killing your enemies is by unleashing plagues. The strategic use of plagues often can overpower even the most cunning tactical troop use. None of this is to say that the area control aspects of Eschaton are bad, but it is something that is very different and may not appeal to everyone.

One design choice that I especially enjoyed is how culling is integrated into the game. Basically, you can cull any card from your hand to your “sacrifice pile” as long as you don’t use the card for anything on your turn. Better yet, cards you’ve culled can be scored for you at the end of the game and in some cases they even award you bonuses. I appreciate how easily culling was built into the game because it opens up the player’s strategic choices. Culling choices are always on the table and aren’t dependent on getting the right cards. 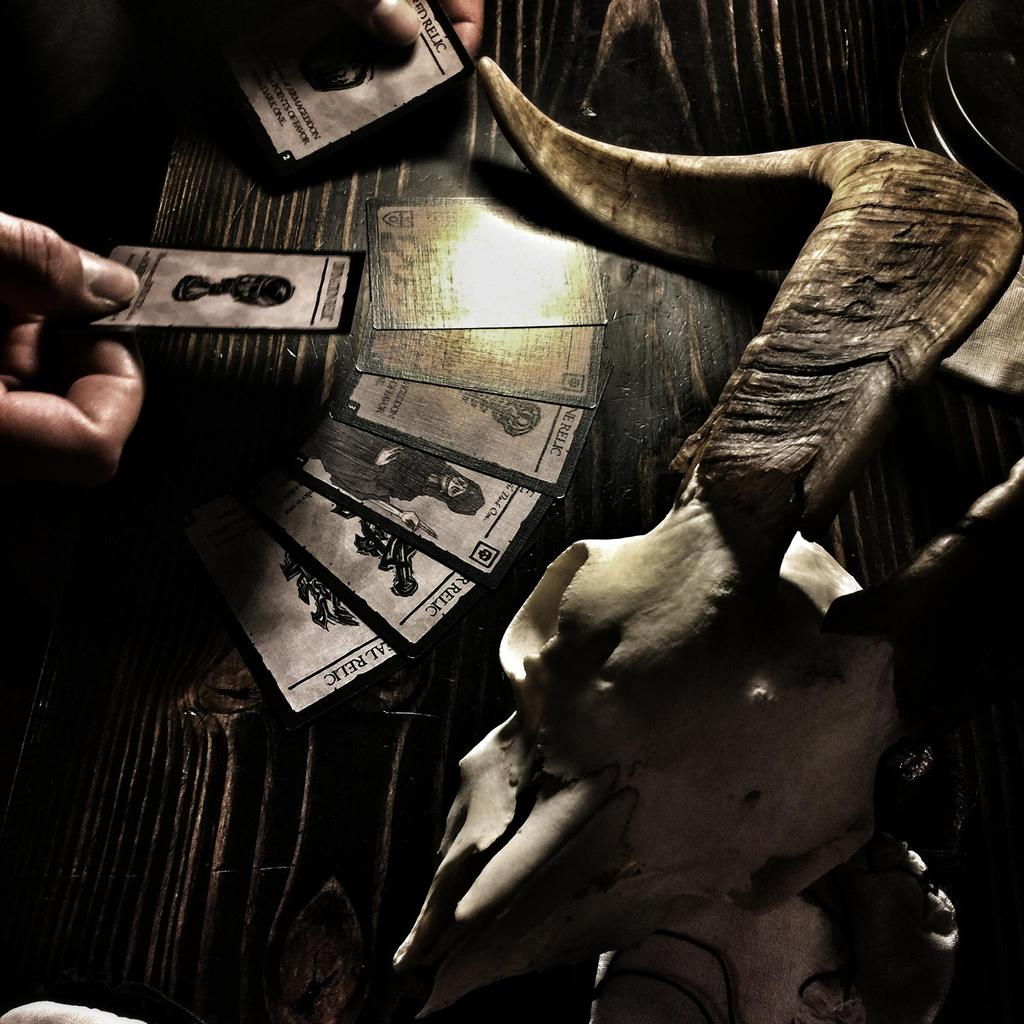 The real problem with Eschaton is pacing. One of the card stats your units will have is Zeal. Zeal allows you to draw an extra card for each point you have in hand. Clever deck builders will have no problem crafting a deck that plays out their entire deck each turn. In fact, the game openly advocates this every chance it gets. Decks that balance Zeal in such a way that get your entire deck out each turn while maxing out your other stats you generate make for the optimal strategy in this game. A good Zeal engine will combo with every other stat allowing you to add powerful arcana cards and units to your deck while building you up enough aggression points so that you can do whatever you wish to do on the game board, limited only by the number of cubes you have. The reason all of this is a problem is that a good player’s turn will tend to be very long and combotastic. After you’ve played out your entire deck, you will have at least 3 resources you need to manage, one by one. By the time you’ve finished getting your arcana cards in order, you’ll have forgotten what your inspire number is, so you recount it off your cards and make your inspire moves. Then you have to recount your influence and make purchases. Then you have to recount your aggression and carefully count down your actions points. Even with experienced players, game turns become massively long as the game unfolds. Worse yet, this is a problem that will effect normal players and the AP prone alike. As the game hits the mid way point, the pacing of the game slowly grinds to a stumble.

Another issue I have with Eschaton is the static card market. Dominion is a great game, but the idea of the fixed card market is boring and outdated. There are several games that have replaced this with something different or better. Eschaton tries to add randomness and unpredictability through the use of the Arcana deck (where you draft cards rather then buy them from a market) but the fixed character supply makes the game somewhat predictable and I would argue “solveable”. Certain cards (especially those with Zeal bonuses) are more important early in the game to get your engine going. It makes the choices you have in building your deck less interesting then if you simply randomized the card market (ala Ascension, Star Realms & so on). I hope that future expansions can work on this issue. 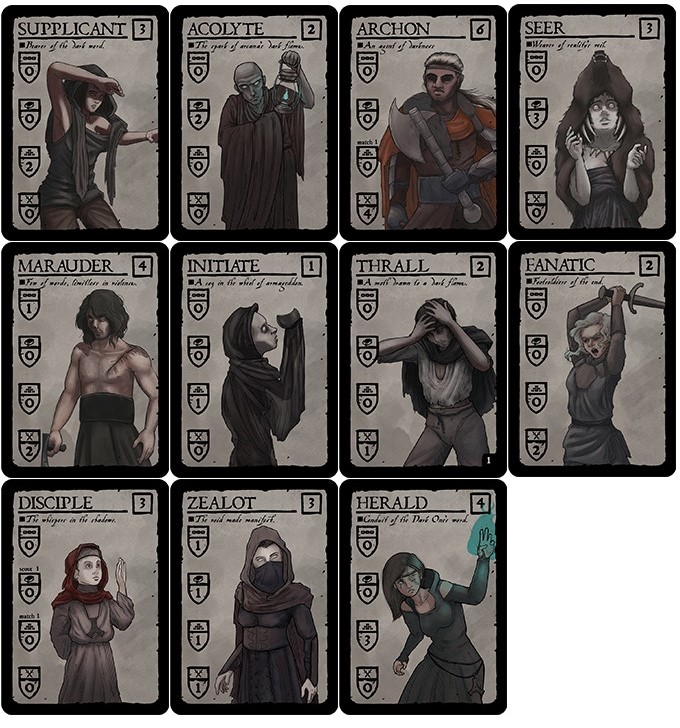 A brief note about the Kickstarter experience. I was a backer of the Kickstarter project based on early buzz from Gen Con 2016. The project itself was almost a year late, and the project managers did a below average job of communicating with their backers. Backers repeatedly asked for estimated deadlines and updates, but only received vague “its coming soon” type messages back until finally the game showed up. As someone who has back MANY projects on Kicstarter, the responsiveness and planning on the part of the project creators was extremely disappointing. With that said, I did back the expansion project because I do enjoy the game enough, but the experience of this Kickstarter gave me very real pause before I backed. I would encourage the design team to take the time to study successful Kickstarter practices before starting any new projects (too late as the expansion for Eschaton is getting ready to wrap up). I am tentatively optimistic about what the future holds for this game and the expansion SEEMS to have variable starting factions/decks ala Hero Realms along with a few additional rules to spice up the variety of the game. Unfortunately, the design team has done a poor job explaining what exactly is in the expansion and how it adds to or changes the base game.

But what about Tyrants of the Underdark? I love deck building games that try to do something else. Tyrants of the Underdark and Princes of the Dragon Throne are two of my top games of all time. Eschaton really doesn’t have much in common with other deck builders like Clank! or Trains, so the big question for me has always been if I need to keep Eschaton if it itches the same scratch as Tyrants & Princes. Eschaton doesn’t replace Tyrants for me (despite Eschaton’s better looking board & cards) because Tyrants is a far more polished feeling game. The pacing and lack of slow down in Tyrants is a significant point in Tyrants favor. Both Eschaton and Princes feel a bit old and lack the polish of Tyrants, but Eschaton doesn’t jump out as replacing Princes either. Princes has some awkwardness to how it handles deck building and area control, but I never have the pacing issues that frequently crop up in Eschaton. So Eschaton doesn’t fire any games for me, but do I keep it moving forward. Ultimately, yes. Eschaton has good bones beneath a pretty exterior. I am cautiously optimistic that next year’s expansion will offer some interesting places for the game to explore. That said, with just the base game, the only time I would want to play Eschaton over Tyrants or Princes is if I’m looking for a change of pace. 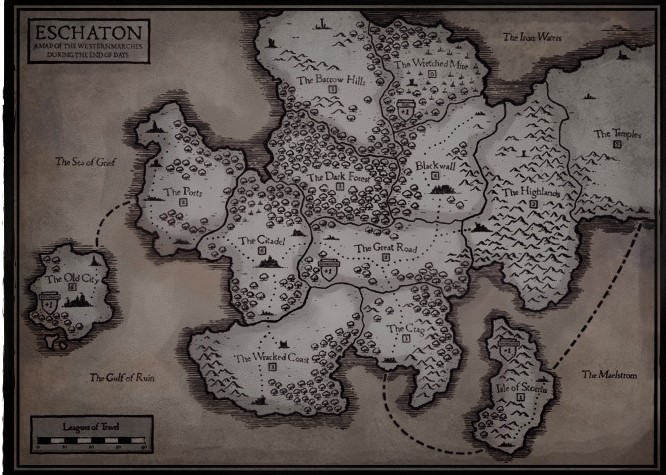 Eschaton isn’t a bad game, not by a long shot. It does what it does very well despite feeling poorly paced and occasionally awkward. The problem is that Eschaton stands as being VERY similar to Tyrants of the Underdark, and it never really comes off as an obviously better game. Casual fans of deck building games are better off tracking down a used copy of Tyrants to see if they like this kind of game. Fans of Tyrants will find a lot to enjoy here though if they want a different take on deck building mixed with area control. Eschaton is a worthy enough purchase that should find a loyal “cult” following among deck building aficionados. 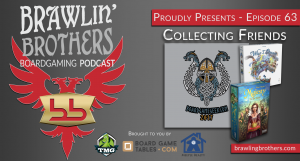 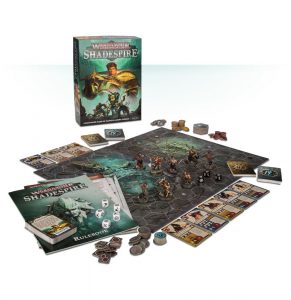