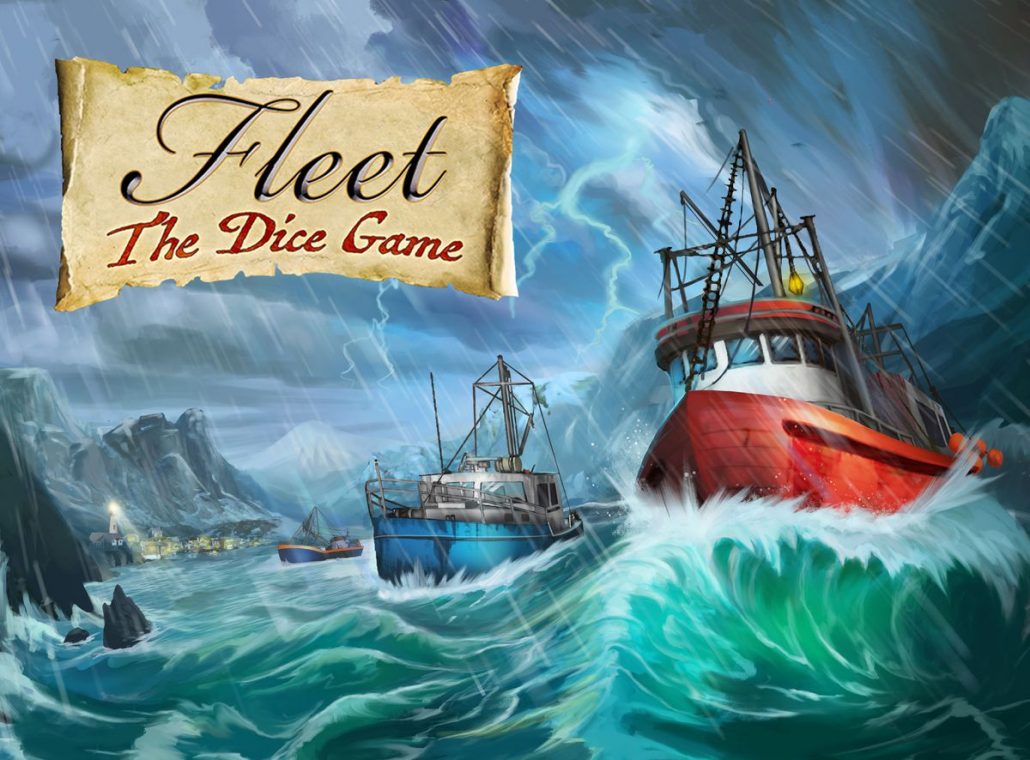 Cod Bless Everyone! – A Fleet The Dice Game Review

You would probably be surprised to hear how long it took me to write this review. A great (or especially bad) game is just the fuel that I need to kick start the creative juices. Sometimes though a game gives me a bad case of writers block. Often times this means I just don’t bother writing the review, but there are some games that are either so good or so bad that they truly compel me to get over my own short comings and just write the damn review already. 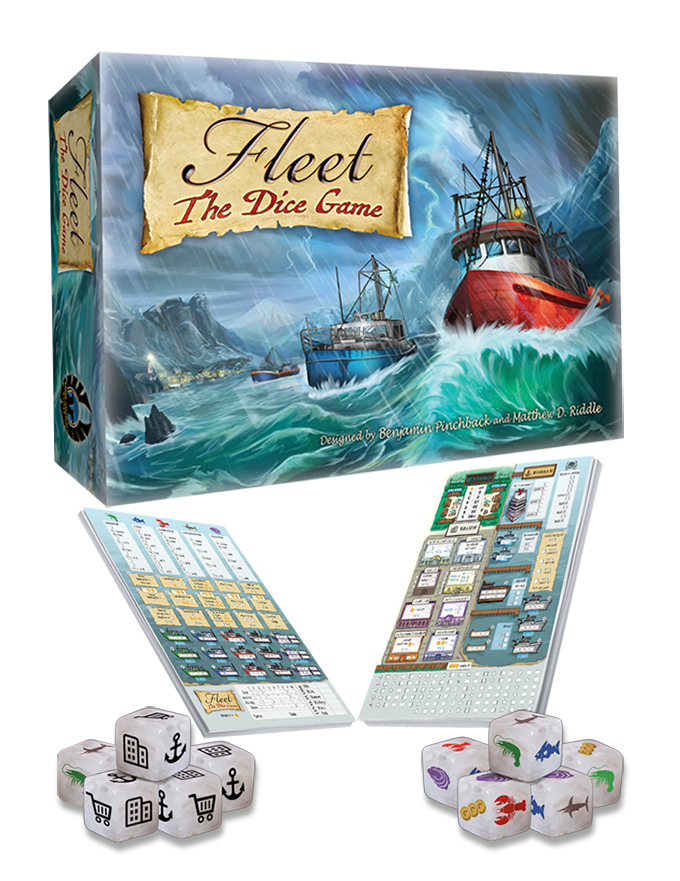 Fleet Dice is one such game.

Ostensibly, Fleet Dice is a game that gives players a flow chart of player powers and victory points that they can gradually fill out over 10 rounds through a series of dice drafts. All the cool kids these days call such a thing a “roll and write” game, but I find that such a label is misleading here because it buries the lead of what this game really is. Ignore the fact that you have score pads and pens, Fleet Dice is a tableau builder with dice drafting and a pinch of Hansa Teutonica to boot.

The word that perhaps best describes Fleet Dice is restrained. I say that as a sincere compliment. You could easily emulate (or over complicate) Fleet Dice using player boards with recessed slots, cubes, and tiles. In fact, conventional wisdom says that the more deluxe the game’s components are, the better. Games Workshop and CMON will be the first to tell you what customers respond to. Overproduction is the rule, not the exception. I own more then my fair share of games with minis, foil cards, and dual layered player boards, so I’m never going to suggest that bling is bad in and of itself. The problem I have is that when a game’s design process adds gimmicks as a way of justifying physical content, often the end result is that the expansion feels distracting and unnecessary. The 3d tree in Everdell and the Gods of Asgard in Blood Rage both come to mind. Fleet Dice is a game focused on the game play, specifically a straight forward draft that powers a branching decision tree ripe with positive feedback loops. Nothing feels extraneous, and the product feels like a complete and self contained ecosystem even if the expansions make for a welcome bit of variety.

The dice drafting itself is deceptively simplistic. Twice each round you’ll have a standard dice draft where you get to pick one die for yourself, and then everyone gains the benefits of the die that nobody drafts. Simple, right. The dice drafting moves quickly and there is a good bit of room for hate drafting and general jerk-ery if you so wish.

What makes this game shine though is the lovely flow chart of expanding player powers on your score sheet. As you draft your dice, they open up new powers that inevitably combo off of one another, creating a juicy positive feed back engine. If you’ve played the original Fleet card game, you should have a pretty good idea of what all of this feels like (as Fleet Dice does a remarkable job echoing the combo/engine building of the original Fleet). Fleet Dice is a game that is constantly giving your positive feed back. “Aren’t you clever for comboing those powers? Let me give you a bonus action as a reward!” Fleet Dice never lets up on the praise and rewards. But be warned, Fleet Dice is also singing your opponents’ praise too, and the game scoring is just opaque enough to leave you guessing about who is really winning right up until the final scoring.

All of the bonus actions and treat the game gives you could be a draw back for some player groups though. While the drafting of dice doesn’t leave room for much AP or down time, how players choose to spend their bonus rewards can create an excuse for some players to bog down their turn trying to min-max their engine. I don’t think this is going to be a problem for most, but it certainly gives me pause when I eye the box’s suggested 30 minute play time (especially for new players).

I think there are going to be some who thing that the game has some danger of being “solvable”, but the variability created through the dice draft makes the game just uncertain enough that even the craftiest of players is going to have to switch up their strategy depending on the fickleness of what the dice give them to work with. At the same time I think others may criticize Fleet Dice because of a perceived lack of variability (which the two expansions do help with). While the game engine doesn’t change from game to game, the output randomness of the dice makes for a constantly changing and unpredictable puzzle to work out over the dozens of plays you can squeeze out of this box. 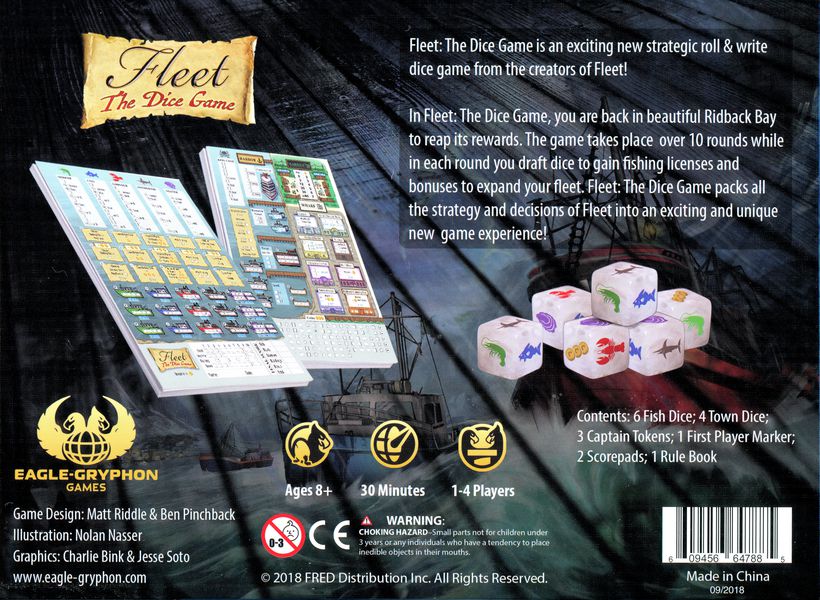 The criticism that sticks with me and keeps Fleet Dice from being a perfect game is that there is so much combo-tastic stuff going on, it can sometimes be tricky to keep track of everything you can/need to do. While this isn’t game breaking, it can invite room for some user error and you may want to have your kids/parents talk through their turn so that they don’t break the game’s tight balance. I disagree with most of the book keeping criticisms I’ve heard from some players. I don’t think the book keeping here is particularly fiddly or obnoxious. In fact, I think the sheet lay outs are pretty straight forward and help to navigate a player through their many options. Where thinks aren’t so elegant is in how income is calculated and I think that if you want to be safe, even experienced players will be talking through their income calculations each round. None of this is particularly annoying, but its a slightly rough spot in a game that moves along pretty smoothly.

While the solid artwork fits in nicely with the “Fleetverse” of games, there is no real narrative or plot to speak of. There is some sense of setting to create a framework for the game design, but that is something lost the second you start mapping out your next few euro-tastic moves through your flow chart. I can’t imagine anyone would buy this game looking for a thrilling narrative, but be warned, Hemingway, this is not.

Fleet Dice is a design that is easy for me to fall in love with. This is a game that goes out of its way to tickle that lizard part of your brain that loves positive feedback and rewards. Instead of overwhelming the senses with overproduced and under-tested game modules, Fleet Dice has opted for a relatively simple frame work that offers room for robust decision making. I doff my hat in gratitude to the designers and developers of Fleet Dice because it is such a carefully edited and delicious game experience. One that I’ll be happy to return to so long as there are more fish in the sea that need to be murdered. 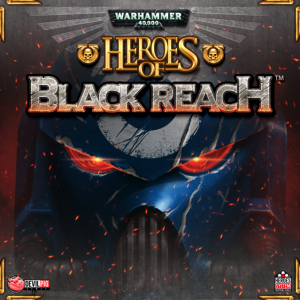