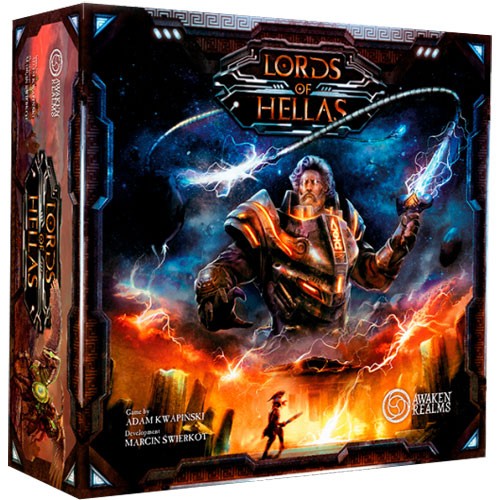 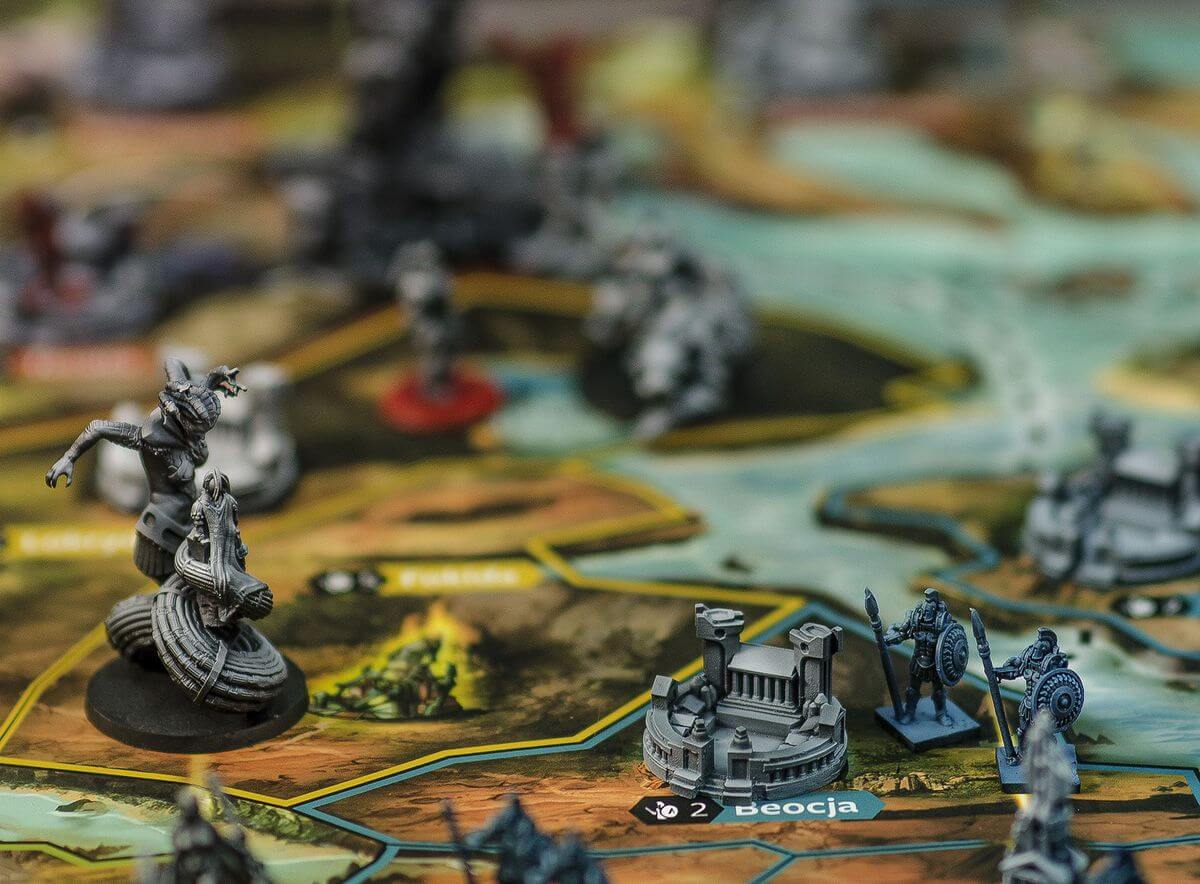 The back story for Lords of Hellas does not leave one with the best of impressions.  Ancient aliens worshiped as Gods during the Greek Dark Ages with a dab of anachronistically applied Greek mythology.  It sounds like something you could dredge up on a Stargate fan-fiction forum.  I’m sure Michael Bay has his people looking into it.  Luckily for us all, the plot of Lords of Hellas is little more then the excuse for some cool art work and miniatures, both of which you are going to find in this box, in spades.

Lords of Hellas is not a subtle experience, and it is very easy to see why some people will fall in love with it.  The game is an absolutely gorgeous artifact and provides such a stunning aesthetic experience that one can’t help but pause the game mid-round to appreciate the beauty of the armies, monsters, and monuments spread out on the vibrantly colored map.  As a kickstarter backer who signed up for Awaken Realms’ much discussed “sun drop” shading/highlighting I am especially pleased with the end result look of the figures on the table.  While it isn’t a perfect technique, it is good enough so that it accomplishes the feeling one might get from looking antique marble statues from an elevated perspective.  To my eyes, the look is simply stunning.  If you’ve ever caught yourself mesmerized by the board state mid round in Blood Rage or Cthulhu Wars, just brace yourself, Lords of Hellas manages to rival even those giants. 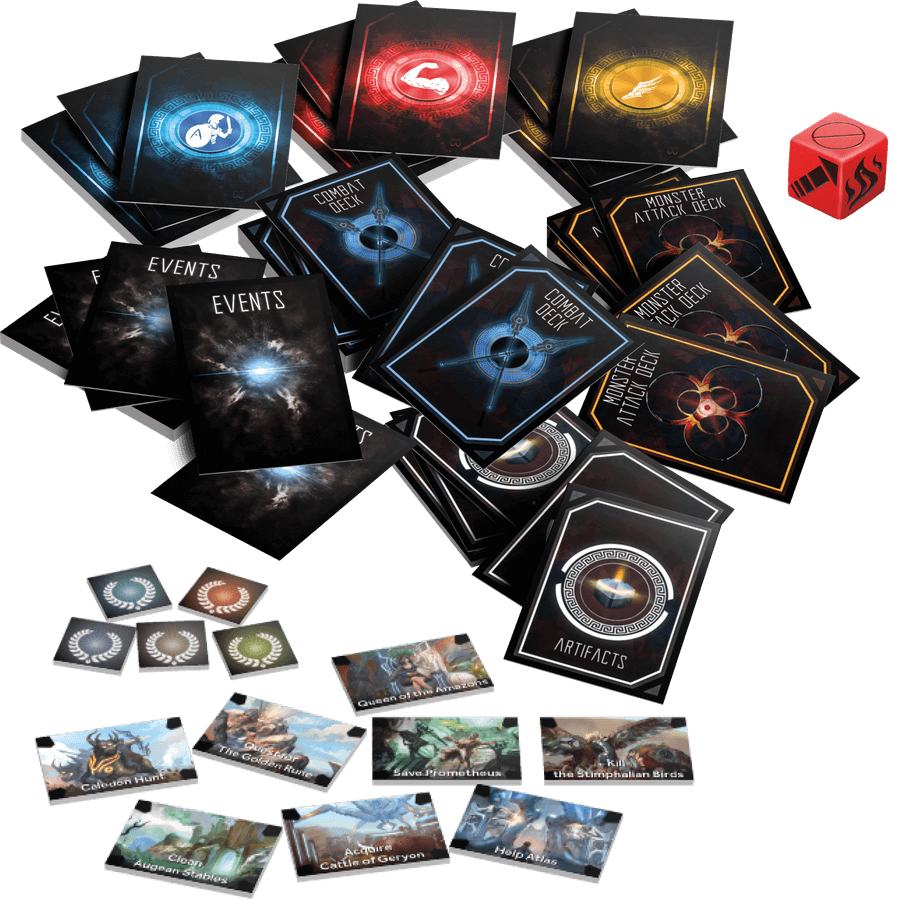 The game play itself comes as off feeling like euro/ameritrash  hybrid dudes game popularized by Matagot.  Lords of Hellas feels like it could have fit in perfectly with games like Cyclades, Kemet, or Inis.  The hook for Lords of Hellas is its pairing of dudes on the map with a faux Roundel action selection mechanism.  Its similar in many ways to the cards in Concordia.  Lords of Hellas further twists the genre by giving each player their own hero who runs around the board experiencing your standard Greek epic adventures while at the same time they have a small army playing a traditional area control game in the background.  This dichotomy feels a bit counter intuitive at first, but once you have a round or two under your belt, you’ll come to think of your army as a side plot to your hero’s exploits.

The complex action planning in some ways reminds me of what players are forced to do in Scythe, but with vastly  more fighting and none of the weird  resource penalties you get from Scythe’s punishing power evolutions.  Simply put, Lords of Hellas does the Scythe euro-schtick without any of the annoyances that mire every game of Scythe I’ve played.  Lords is very much the game I wished Scythe could have been.  Each turn players find themselves shuttling troops around the map.  They will abuse their super powered blessing cards and artifacts.  They will send their hero out to cause trouble or dabble in one of two different mini games.  But best of all, players get to take a special power action that typically drives the game state forward towards its inevitable conclusion while conveying a palpable sense of empowerment to the players.  This is something we see in Kemet/Cyclades/Inis and it is something that is just as satisfying in Lords of Hellas. 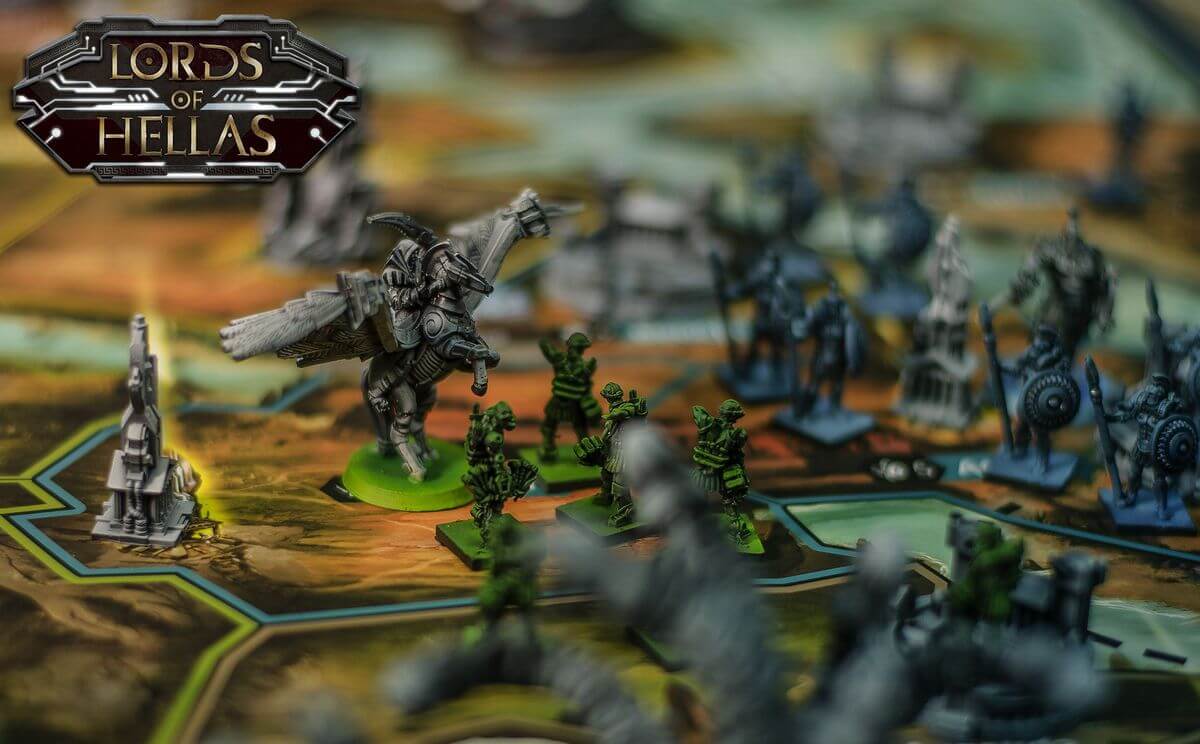 Something that isn’t going to sit as well for some players is how Lords of Hellas balances its 4 victory conditions.  The rule book does a good job explaining the nuts and bolts of how the victory conditions work, but you should never teach the victory conditions by reading directly from the book.  Instead, it is vitally important to explain to everyone that if you want to win the game, not only do you have to complete a victory condition, but you will also have to fight tooth and nail to keep anyone from completing the 3 hunt victory condition.  This includes emphasizing the importance of using a strategy that leans heavily on building up the monuments.  If left unchecked, a player can complete the hunting victory condition much faster than any other victory condition.  The more players that go after the hunt victory, the more likely it is a different player can pull of an alternate victory condition (such as rushing the Monument victory).  In practice, this means that everybody is going to be vying for the monster hunt win AND doing everything they can to complete at least one other victory condition.  It is inevitable that people are going to argue that the game feels imbalanced, and yes, it can be if players aren’t aware from the first turn that it is everyone’s duty to make sure nobody pulls off a monster kill win.  I also expect that the monster kill win condition will be something that can be customized as expansions are released.  Different God monuments and different numbers and types of monsters on the board should dramatically customize one’s experience with the game. 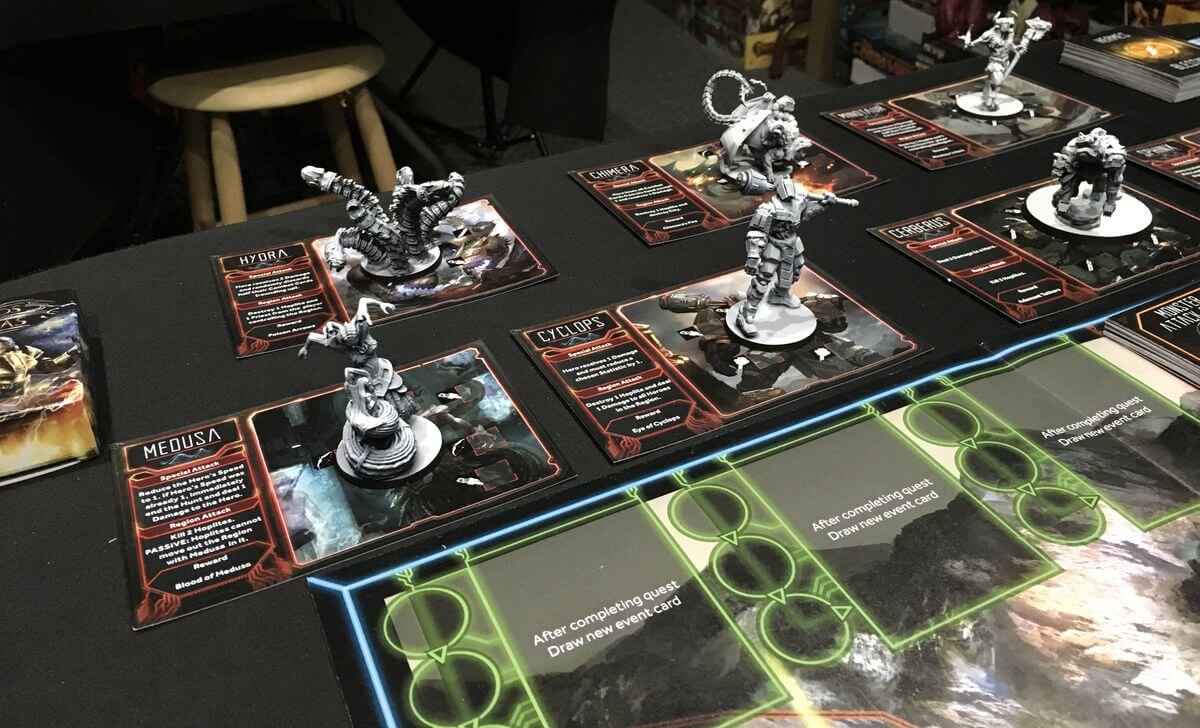 Lords of Hellas is an obvious addition to my list of favorite dudes on a map styled games.  It won’t knock Kemet, Blood Rage, or Cthulhu Wars off the top of anybody’s favorite games lists, but it is a shoe in for one of the best games of the year and will be one I’m going to play long after I’ve forgotten this review.  The design does an outstanding job of conveying the feeling of the Greek-like setting, complete with the classical epic hero’s quest, even if the whole ancient aliens bit feels a bit too cheesy for my tastes.  The core set is satisfying, although, I expect that it will only shine brighter with the expansions filling out the complete roster of characters available to shape the game’s war torn landscape.  If you enjoy top tier dudes on the map style games, this is a no brainer addition to your collection.  Buy with confidence. 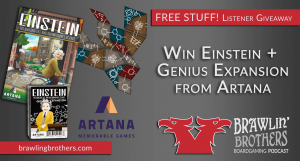 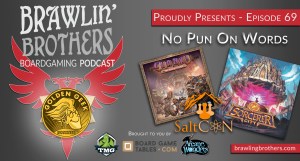