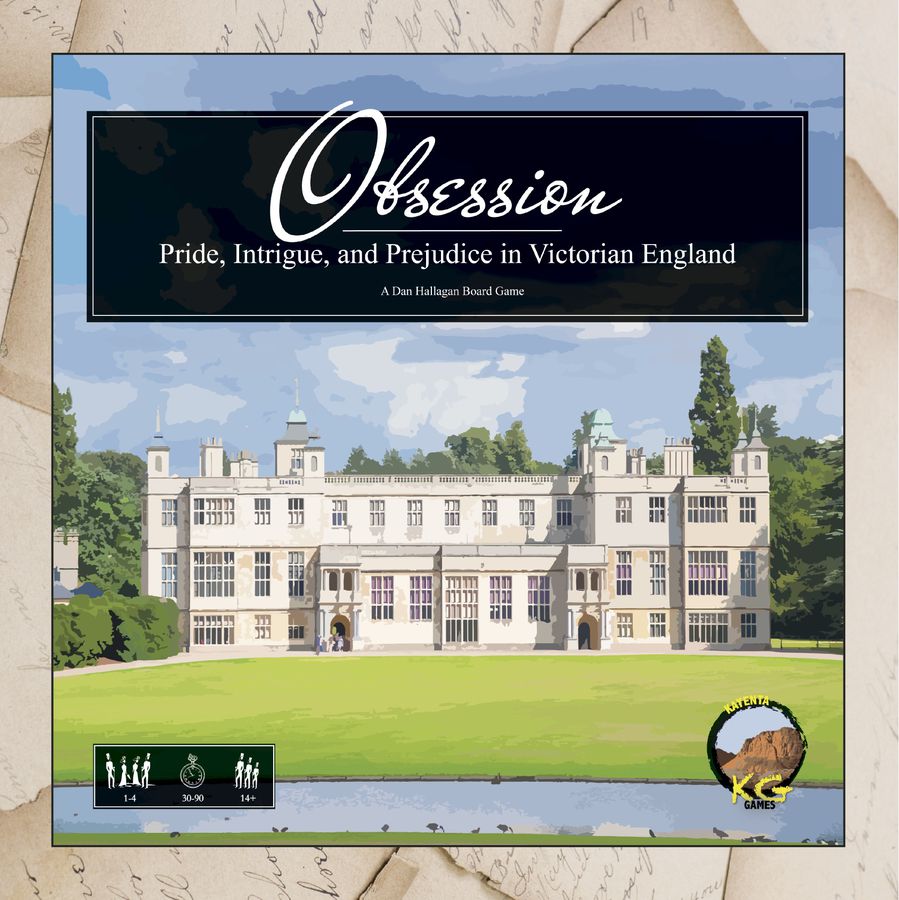 I don’t think I’ve seen so many advertisements on BGG for a game since the Ortus Regni Kickstarter campaign of 2014. To be fair, that is exactly the reason that I found out about Obsession from Kayenta Games, so I guess the marketing push worked. Good on Kayenta Games I suppose, but who among us isn’t at least a little hesitant whenever they see a huge ad push on BGG? The lady doth protest to much, methinks?

If I’m going to be fair, I think it is worth mentioning that Obsession is the very definition of a passion project. Just take the time to read through designer Dan Hallagan’s many videos, BGG postings, and Kickstarter updates. I respect Dan’s enthusiasm for every detail of this project. Without looking at his ledger, I strongly suspect that this game has been funded in no small part with Dan’s own funds, and would be stunned if he was able to turn a profit off of the first print run. Aside from the sizable marketing campaign Dan has shelled out serious money on a solid rules video, component upgrades, and reprints for errata’ed components. There is no way the $36k he brought in on Kickstarter is enough. Dan’s desire to make this game meet and exceed his vision is admirable, something I appreciate as a consumer, and probably more then a little bit nuts. Without spoiling my review, I can without hesitation say that Dan Hallagan has made exactly the game he wanted to make and that isn’t something we see to often from most designers, much less hobbyist publishers on Kickstarter. 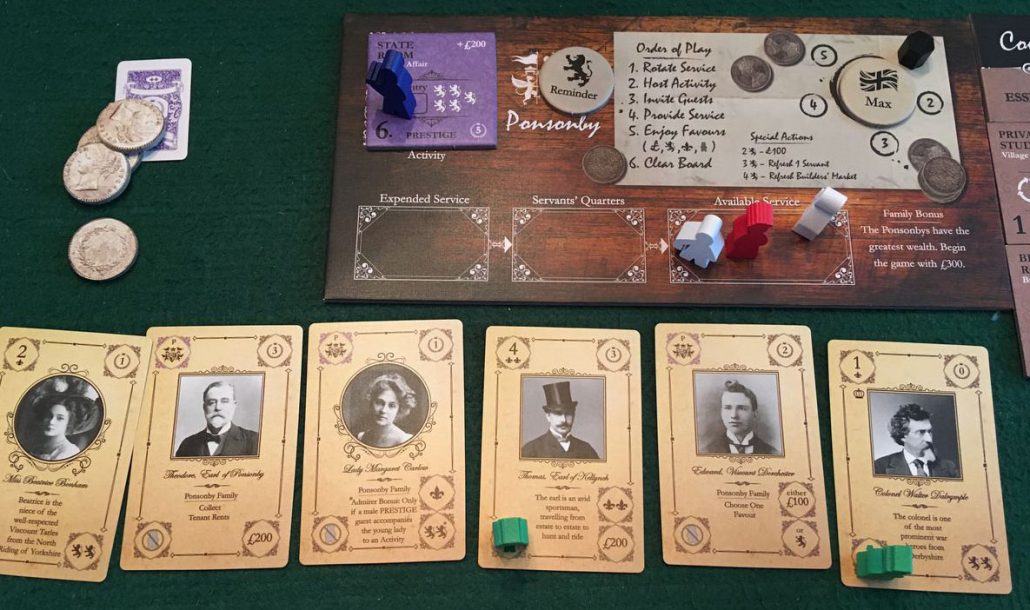 The second fear that anybody backing a first time designer/publisher has on Kickstarter (after “Will the project even be fulfilled?”) is, “Will the game be any good?” Obsession, frankly, is an oddly designed, but not unpleasant duck. Its kind of like a platypus that defecates garnets. I mean, its pretty cool, and you may be able to turn a small profit on resale, but wouldn’t you rather it just lay golden eggs or something more marketable, or at least something that doesn’t involve the business end of a digestive tract? The biggest design oddity in Obsession is a superbly wonky set up. The game requires that you pick a game length, and customize your variant rules, and that you carefully sort/seed/mix a bag of dozens of tiles, and that you draft player powers, and that you draft guests, and on and on and on. This is a game you are going to set up on your table before game night even begins. You aren’t going to want to pull this off the shelf and spend 30 minutes setting up your fully customized game while your friends are texting each other their thoughts on the latest Ariana Grande single. Oddly specific, I know. Sure, having a fully customizable gaming experience is a great problem to have, just be prepared for the price that such a luxury costs in set up time. 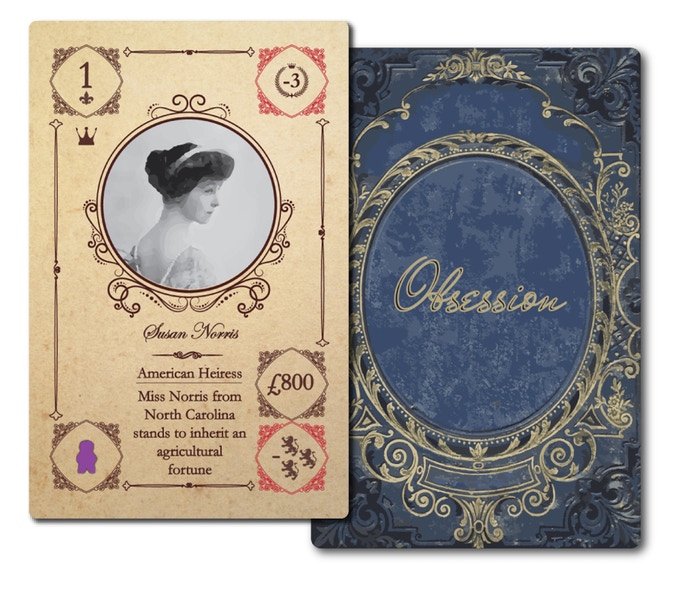 As a gaming experience, Obsession plays out as a hybridization of dozens of familiar game design ideas most of us recognize by now. You have a deck building / hand management system that is lifted directly from Rococo. You have an action selection / resource management system that feels like an inbred cousin to the worker placement mechanism. You have a weird spin on tableau building that Tom Lehman probably wrote up after spending a week in a sweat lodge. You have a shifting tile market that has shown up in almost every game made since 2006. By all rights, Obsession should be an unplayable mess. Haphazardly throwing together dozens of disparate design ideas is why we have games like Dinosaur Island, after all. Funny thing, Obsession is kind of like one of those weird Pangolin thing-ies (Google it). Its an animal that evolution should have killed off eons ago because its just so bad at staying alive. Unlike Dinosaur Island, the many different seemingly incompatible parts that make up Obsession, actually come together in a surprisingly coherent way. My biggest beef with Dinosaur Island is that the game always feels like I’m playing 4 or 5 mini-games back to back and it never really gets into a rhythm. Dinosaur Island lumbers along like a Pangolin tripping on sugar water while Obsession, glides along like Christopher Walken strutting to Fatboy Slim’s “Weapon of Choice“. Do yourself a favor and spend the next 4 minutes watching that video. I’ll be here when you get back.

Obsession just flows somehow, even though your every instinct says it shouldn’t. The iconography, the player boards, the generous player aids, it lets the game play flow as if you were demoing the game at the direction of the designer himself. The slick game flow is a credit to the designer’s loving attention to detail and commitment to his vision. Obsession creates a slick environment where you’ll be balancing hand management, resource management, and quite literally juggling your staff meeples so that they are available at exactly the right moment. 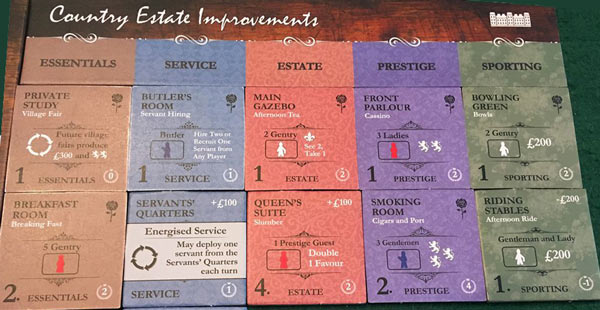 Oh, and before I forget myself, Obsession’s crowning achievement is just how good it feels to play. Each round offers the players the chance to host an event that results in the player getting more goodies. New fancy guests, money, more rooms to build, reputation points, and so on. I hate to repeat myself from my earlier reviews, but I love it when a game gives me rewards and feeds my lizard brain. While the choices and math in this game are extraordinarily tight, the pay off you get even on a sub par play feels damn good. 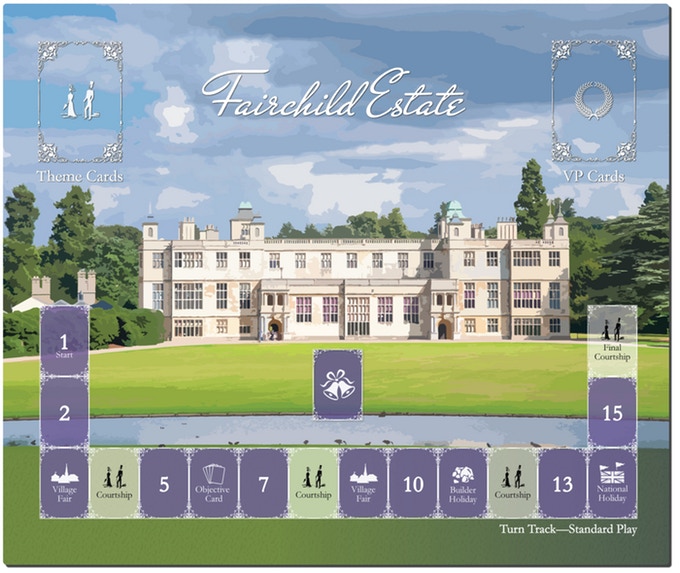 Anyone who has read my reviews before knows that I have a real soft spot in my heart for storytelling in games, and this is probably the most impressive accomplishment in Obsession. Dan has made no secret that he wanted Obsession to evoke the setting Downton Abbey with a hint of Jane Austen. Its a bold choice for sure, seeing as most games set in 19th Century England are concerned with either murder or industry. Sadly (or not) there is no murder or industrial grime to speak of but there is plenty of repressed sexual tension and passive aggressive gendered gamesmanship. This is after all a game all about manipulating a pair of wealthy orphans so that your children can get into their pantaloons. There is nothing creepy about that whatsoever.

The dedication to narrative extends even into the rules books. Obsession takes the two rule book approach from Fantasy Flight. You have a quick start rule book that does an excellent job of quickly getting you into the game, and then you have a 30 page glossary book that breaks down all the extra rules and terms. Best of all, roughly one third of the book is dedicated to the connections between the game’s design elements and the real world setting that inspired it. This comes out to about 10 pages of thorough fluff text, including an entire page story telling players about the back story of the orphans you are … ugh … not having impure thoughts about.

In all seriousness, every card has a unique flavor text that explains that given character’s abilities and their place in the world that is Obsession. In fact, you can lay out every character card on your table and build a complex web showing everyone’s role and relationship in Obsession’s complex social ecosystem. The story of Obsession is almost impossible to separate from the game itself. You can’t help but imagine all the sexy adventures the characters get up to while you send them off to appreciate exotic topiary. Why is my family’s son make so much money every time he meets up with the elderly dowager over tea? The setting, while at first blush may appear as parched as Col. Winthrop’s chapped pate, it is every bit as moist and lurid as, well … I’ll leave that up to you to find out!

While crunchy mid-weight euros aren’t especially known to encourage jovial banter, your game group would have to be pretty soulless not to give into the urge of using funny accents or the occasional lewd puns. If you have a game group capable of bringing the funny, there are good times to be had here.

First time Kickstarter publishers are well known and frankly expected to cut corners on the quality of their game components. This is not the case with Obsession. The components are at or above what you’d expect from the latest Game Salute … er … Starling Games title. The last thing you would want in a game about the wealthy elite of 19th century England is cheap cards and tiles. The loving attention to detail isn’t cheap and I appreciate Obsession as a final product.

For better or for worse, Obsession is very much a game founded in reality. The setting is quite heavily colored in its patriarchal and misogynistic setting. There are no people of color except for the occasional person of Scottish or Welsh decent. There is a very real undertone of sexual politics at play in Obsession. If I had to fault Obsession for anything it would be that the game does have a Jane Austen inspired cavalier attitude towards the fiercely oppressive historical setting. I think its fair to say that Obsession is a romanticized depiction of the wealthy elite in England, just try not to dwell on how these families became wealthy in the first place.

Quibbles aside, Obsession is an absolutely solid bit of game design that fully embraces its setting and narrative in a way you don’t see often outside of Arkham, Massachusetts. Obsession is a game that succeeds as a story telling device, which is surprising considering how euro-tastic the design of the game actually is. Obsession is an enjoyable refinement of design ideas and techniques that never feel derivative or really innovative, and that is enough to make it one of the best euro games of 2018. Get while the getting is good though, there is no telling how long a passion project will stay in print. Polish your shoes and have the Valet bring your carriage around. Those orphans aren’t going to seduce themselves … I hope. 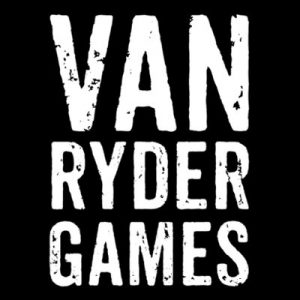 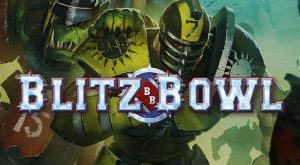