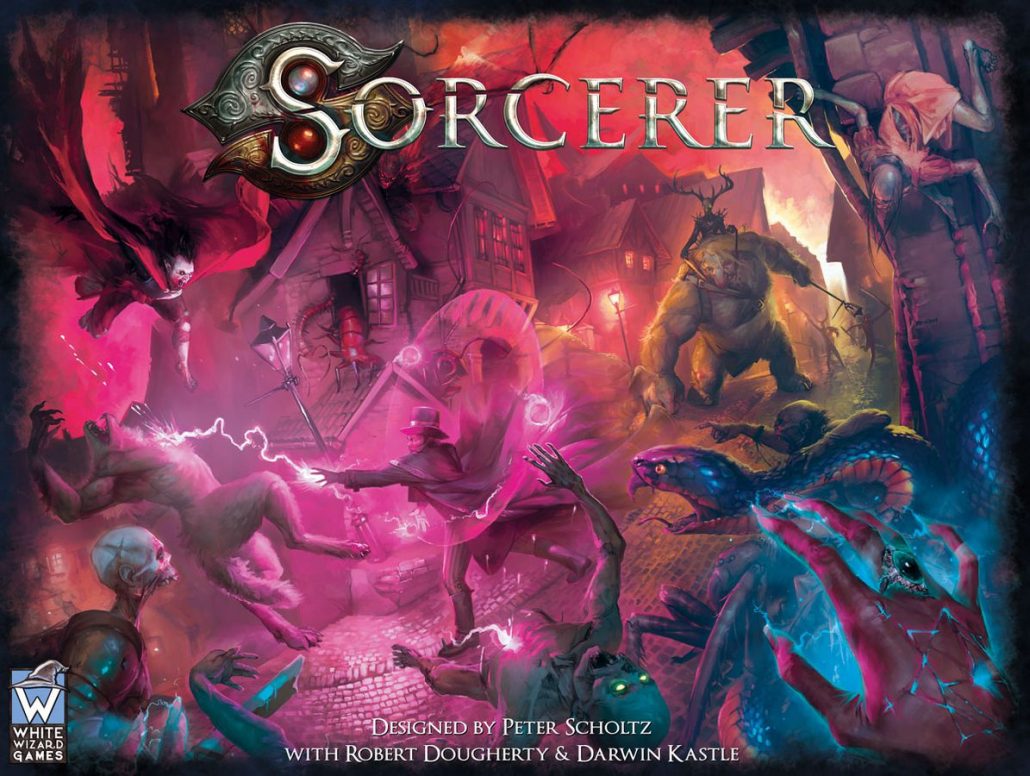 Smash Up! Redux, A Sorcerer Board Game Review

Sorcerer is one of those games that you’ve probably played before, and I don’t exactly mean that as a slight.

I remember fondly when Smash Up! first came out seven years ago. I was captivated by the idea of near infinite replay-ability through the deceptively simple idea of mixing factions together to form a cohesive deck. I really, really, wanted to fall in love with Smash Up!. Unfortunately, I found that the game itself just wasn’t particularly enjoyable for me. I found that the factions never really meshed or combo’ed off of one another in satisfying ways. I found that the struggle to control locations, and the combat engine weren’t particularly exciting. For me, Smash Up! just never lived up to its potential and was I walked away feeling quite let down. 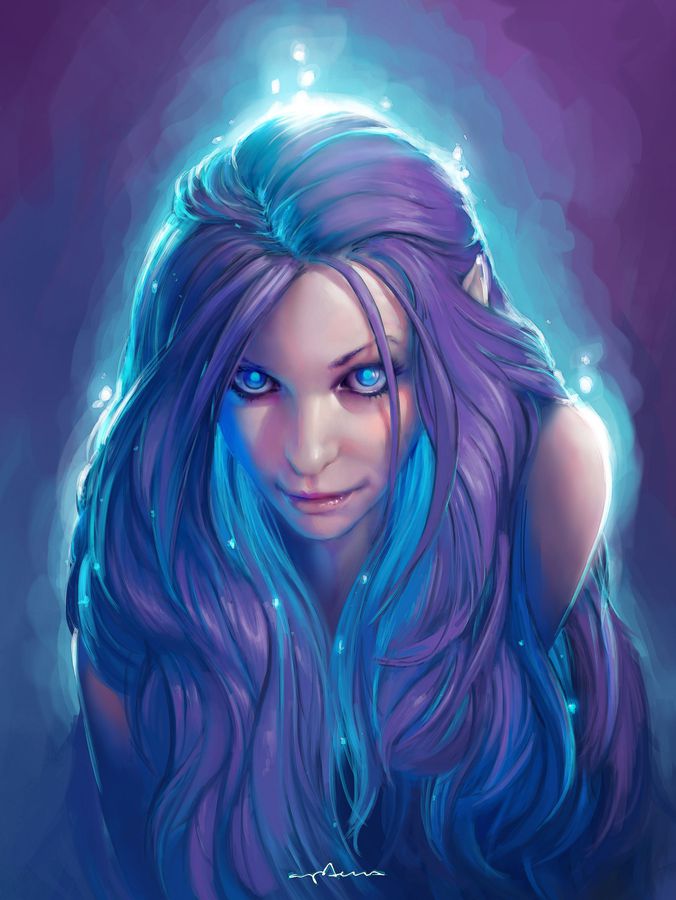 When I sat down with Sorcerer, I was struck with a real sense of deja vu. Sorcerer is a card combat game pitting mage against mage. Who hasn’t seen this game before? Anyone? Just like Smash Up!, Sorcerer has players building their decks by randomly combining (or drafting) a character, school of magic, and a home base/lair. Having 3 variable parts to your deck’s construction makes for a greater level of variety among possible deck combinations (or so the more mathematically inclined among my play group tell me) when compared to Smash Up!. The other game that Sorcerer calls back to significantly is Mage Wars, and I don’t just say this because of the fact that both games pit spell slinging goths against one another. Rather, Sorcerer’s dice driven combat feels very reminiscent of the combat found in Mage Wars. Your attack rating determines the number of dice you chuck in combat, where your dice can deliver failures, single successes, double successes, and critical successes of varying degrees.

I can see the disappointment in your eyes now. So Sorcerer is a mash up of a couple of games that were released 7 years ago? Does it stand apart from either of those highly regarded games?

The most subjective thing I can think to say about Sorcerer, is that it nails what I wanted Smash Up! to be. Sorcerer’s area control and combat engines, while not exactly original, are satisfying enough to justify repeat plays. I have always loved the idea of exploring games over dozens of repeat plays. The promise of Smash Up! was that I could pilot a different deck every time I sat down to play. The problem is that the underlying game you played in Smash Up!, for me, just was never fun enough to bring back to the table time and time again. Smash Up! failed to justify the effort to explore the variety of deck combinations. On the other hand, Sorcerer absolutely succeeds in justifying that exploration. The various schools of magic (lineages in the game’s parlance) are the real stars of the show. These schools of magic each occupy unique design spaces that feel wildly different from each other, while at the same time “feeling” just right in a narrative sense. The Animist gets to command an ever growing army of spiders. The Druid grows tree people and heals rapidly. The Bloodlord is an ancient Vampire that feeds off … well, blood. The shapeshifter wolfs out. The necromancer plays well with the dead. Sorcerer just nails the narrative flair of these schools of magic in a way that I’ve not seen since I first started playing Mage Wars. Unfortunately, the character and lair categories are far less compelling and you would be forgiven if you had no idea what the various characters brought to the table.

The greatest sin a dueling card game can commit is a lack of synergy and combo building. Again, this is something Smash Up! just didn’t quite nail. Fortunately, this is probably the one thing that Sorcerer does best. In all the games of Sorcerer I’ve played, I have yet to see a random deck build that didn’t have some sort of interesting synergy and comboing potential. But how can you have so much variety while ensuring that there was still synergy/combo building? Part of the answer lies in each deck’s skill cards. Each deck comes with 3 skill cards (one for your character, one for your lineage, and one for you lair). The cards work as built in combo engines that are always available. Clever use of these cards allows you to deploy minions more efficiently, and give bonuses to your attacks. Leveraging your starting skill cards kickstarts your game engine and failure to take full advantage of these cards can give your opponent an edge. 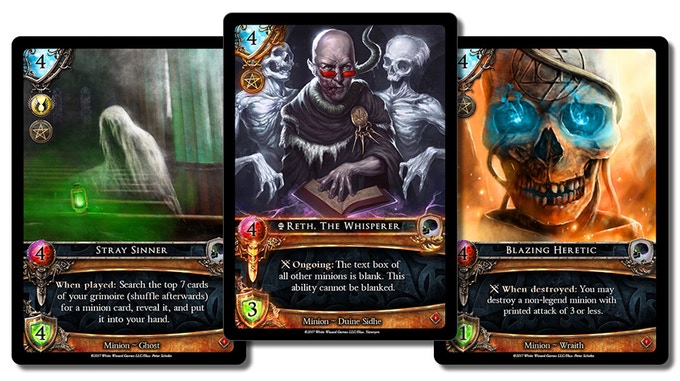 The combo building in Sorcerer also creates an interesting tension when it comes to your avatar. You are represented in the game by your character standee. Each round you can deploy your avatar to a different battlefield. Most deck configurations will make your actions at that location more efficient throughout the round. So do you play your avatar to your weakest location to shore up your defenses? Do you put them in a more fortified position in order to press your advantage? Understanding what your deck’s strengths and weaknesses are can give you an significant leg up too, which creates an interesting point of divergence. The game rewards repeated play and familiarity with what the various decks do, but at the same time, the game’s biggest selling point is the variety of game play that the various mixing of the decks creates. The end result is that Sorcerer is a game that lures you in with immense variety, but keeps you coming back for more with the promise of getting better and better piloting the game’s ever changing decks. The subtle trick of course is that Sorcerer does a good job of proving the exception to the proverb, “familiarity breeds contempt.” 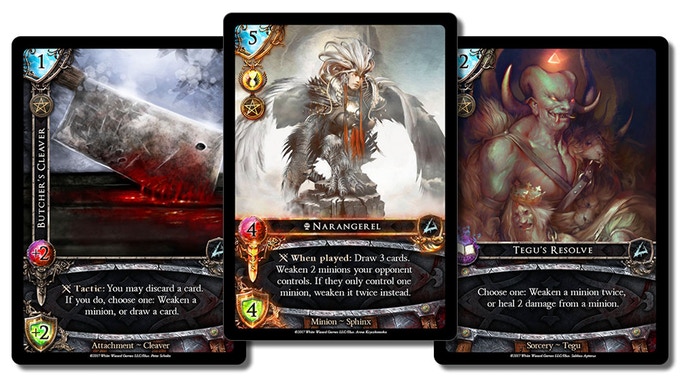 While Sorcerer does a lot of cool things, it does disappoint a bit for me when it comes to the game’s use of dice. Don’t get me wrong, I love dice. I am willing to forgive a lot when it comes to dice. I don’t even find the dice to be particularly random or stingy in Sorcerer. What they are though is boring. The way dice work in Sorcerer is almost exactly the same way Mage Wars has been using them for the past decade. Familiarity does breed contempt. Sorcerer prides itself on the use of Omens which is a resource you spend to re-roll dice (yours and your opponents). This again feels tired and plays out a bit too back and forth not to become a bit repetitive. Maybe I’ve been spoiled a bit much lately with games like Hate that do multiple cool things with dice results, but these days, I just want more out of my dice in order to get my heart pumping. 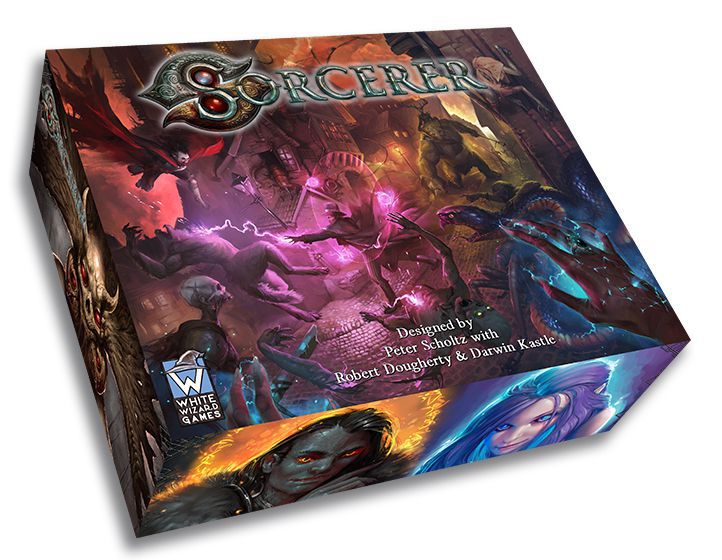 So yeah, Sorcerer is the game that manages to be the game Smash Up! should have been. I’m definitely keeping this sucker around in my collection, and you’d better believe it that I’m going to buy into the inevitable expansions as they show up on Kickstarter. I don’t quite LOVE Sorcerer like I do Mage Wars, but Sorcerer scratches an similar itch without all the bother of constructing decks or re-learning a ton of rules. Sorcerer isn’t quite as smartly honed as Omen (my go to 2 player dueling card game), but it does play decently with 3 and 4 players (something Omen doesn’t). If you are looking for a dueling wizard card game that offers a mind boggling amount of depth, I have to give Sorcerer a strong recommendation.

*Fun note, almost every time I mention Smash Up! in this review, I could have easily said Key Forge instead. Come at me bro!

Follow Us
Episode 102: How to Build a Game Group 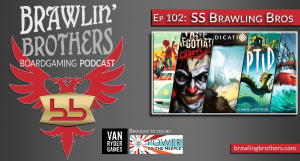 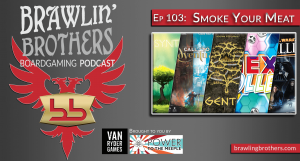